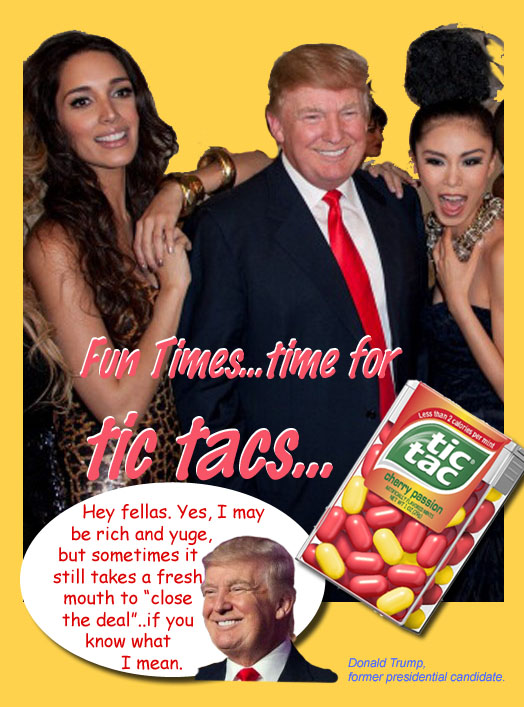 As you might expect, sharp business people like Donald Trump have a gift, call it a knack, for taking a bad situation and finding a new angle, a new way to turn things around. The latest controversy over video/audio from 2005, where Trump admits assaulting women and attempting to seduce a married woman, has shocked many. In the video, Trump says he needs a Tic Tac in case he kisses the actress he is about to meet.

That was enough for the Italian confectioner Ferrero, which makes Tic Tacs, to leap into action. Spokesman Luigi Silvio Soprano noted this as an opportunity. He said*,

“In Italian culture, we treasure our women, in a way that Mr. Trump understands. In the big cities, a man can go all day, copping many feels of buttocks, breasts, and even the occasional crotch. Most women appreciate the attention, and consider it a compliment. So we have signed a preliminary promotional agreement with Mr. Trump, where his stature and image will no doubt boost sales of our fine mint products.”

Soprano mentioned that one trial ad is ready and more are to come in the next few weeks, before the U.S. elections.