Two weeks ago, a source close to the Trump campaign revealed, off-the-record, that Trump was considering taking unilateral military action in Syria and Iraq. 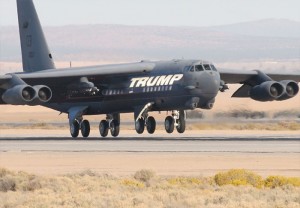 B-52 takes off on a routine test flight in October.

On Friday, Trump took the plan public, and spoke with a small group of veterans in South Carolina and described his plan this way:

“I don’t have time to fool around waiting for our idiot president and his stupid military advisors to wipe out ISIS.  Within the next few weeks, I will be taking a two-pronged approach to stop this scourge on civilization.”

Prong Number One
“The first step will be to offer ISIS leaders an opportunity to invest in my newest resort, “Ali-Don,” near the Syria/Iraq border.  I have some fantastic people working on this deal. We have built a incredibly flat airstrip as the base of our operation, so guests can fly directly to Ali-Don.  These ISIS people are so stupid, that if it goes as planned, they will be broke in 2-3 months, and the war will be done. ”

Trump continued.
“As you know, I am a brilliant businessman, so I’m gonna have a backup plan in case the resort doesn’t work out. Here it is: BOMB THE BEEJESUS OUT OF THEM!!  In a short time, I will be flying bombing missions to eliminate these scumbags.  We are purchasing several B-52s and retrofitting them for extended missions.”

“I am also negotiating with Lockheed Martin to purchase an F-35 fighter (more on F-35) that will be used for shooting down the occasional Russian plane, just to get Putin’s attention, if you know what I mean.”

“This will not cost taxpayers a dime–I am SOO0oo000 RICH, and thanks to free coverage I’ve gotten from the lamebrain mainstream media, I haven’t spent a dime of the $750,000,000 petty cash that I have set aside for the campaign!”

Private Enterprise at War–a new American Tradition
Pre-empting what he described as “pesky legal arguments against his plans,” Trump said, “There is nothing in the constitution to stop a citizen from declaring war, and that’s exactly what I’m doing, because I’m a Man of Action. If you were paying attention when Dubya (Jeb’s idiot brother) ran the Iraq war, private companies burned up a huge chunk of taxpayers’ cash. How is this any different–except this time I’ll pick up the tab? Remember Blackwater? My guys could kick their butts ten times over before lunch! This ISIS extermination will be wrapped up by the end of February.”

Peace for a Richer America
Trump elaborated on effects this would have on his political campaign.
“With this fantastic victory over ISIS, when I take office in 2017, we can get on with making Americans richer and greater and happier than they could ever imagine!  Oh yeah, and whiter than ever—stay tuned for my plan to cleanse our country of all the weirdos that no one likes.”

This entry was posted in satire, Uncategorized and tagged b-52, f-35, trump, trump resort. Bookmark the permalink.