With recent revelations regarding the turmoil in the Trump Whitehouse, a new outside threat has appeared, and several staff members have taken action: food tasters are now as common as criminal lawyers amongst Team Trump. Most notably, though he is not an official staff member, is Trump Jr.’s recent acquisition of a “master taster”. 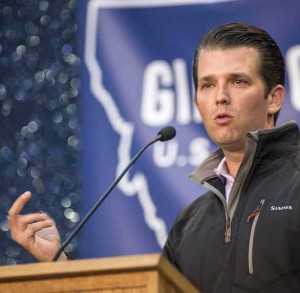 Trump Jr.’s extensive contacts (email and meetings) with Russians may have jeopardized deals with the Trump business and other “off the record” deals that  Trump has made with the Russian Mafiya, where Putin is a powerful, though “unofficial” officer.

Several opponents who have crossed Putin and his cronies in both politics, and in attempting to apply the rule of law, have been killed (link to details). Most died from various poisons, radiation or more violent methods.  Thus, a food taster (most Presidents use them) becomes a basic necessity, in addition to bodyguards and other more “conventional” protection afforded people of power and influence. Did Obama have a food taster? The Snopes website rates this a “true”! 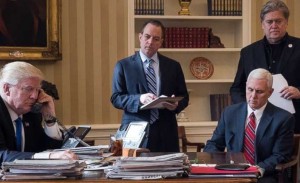 Can you see the “bugs?” Click here to test your counter-espionage IQ and see the wired men.

Perhaps even more telling of the tense mood and conflict within the Trump inner circle, is the rumor that some staff, including Jared Kushner, have hired backup food tasters, and are  wearing recording devices under their clothes, to rectify the complex set of values needed to stay out of prison, stay alive, and still remain “on-board the Trump Train” to make America great again.